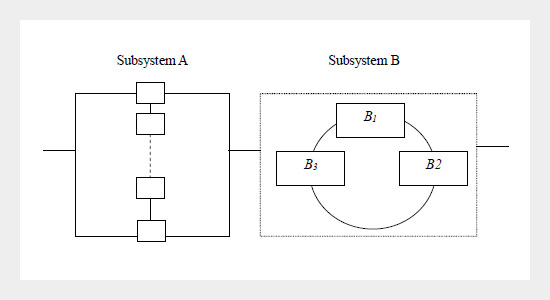 Deepak Kumar* and S. B. Singh

Department of Mathematics, Statistics and Computer Science, G. B. Pant University of Agriculture and Technology, Pantnagar

Present paper discusses the reliability analysis of a complex system which consists of two repairable subsystems namely A and B connected in series. Subsystem A is a k-out of -n: G system and subsystem B is a circular consecutive 2-out of -3: F system. In this study an inspection shop has been taken into consideration along with a special type of delay viz. reboot delay. By employing supplementary variable technique, Laplace transformation and Gumbel-Hougaard family of copula various transition state probabilities, reliability, availability, M.T.T.F., cost analysis, sensitivity analysis and steady state behaviour of the system have been obtained. At the end some special cases of the system have been taken and important results have been derived as particular cases.

[1] Chung, W. K. 1993. Reliability analysis of a K-out-of-N redundant system with the presence of chance with multiple critical errors. Microelectronics and Reliability, 33, 3: 331-334.

[4] Gupta, R. and Bhardwaj, P. 2013. A two-unit standby system with two operative modes of the units and preparation time for repair. Journal of Reliability and Statistical Studies, 6, 1: 87-100.

[10] Ram, M. and Singh, S. B. 2010. Analysis of a complex system with common cause failure and two types of repair facilities with different distributions in failure. International Journal of Reliability and Safety, 4, 4: 381-392.