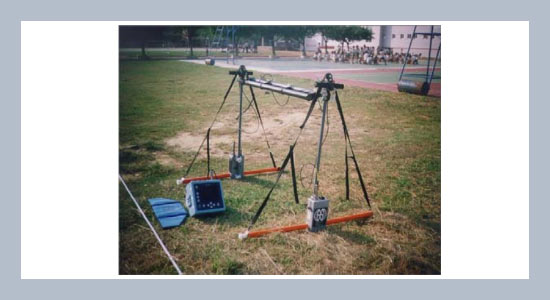 Taiwan exhibits very complicated features (Figure 1). Under the subtropical climate of high temperatures and moisture, the weathering reactions are both powerful and fast. The result, after weathering is the formation of regolith which often accumulates at hills, tablelands and slopes, and which can easily induce engineering problems such as slides and collapse during the rainy season. At present, the engineering industry often adopts methods such as shallow seismic reflection survey and drilling sample to investigate the properties and depth of regolith profiles. The drawback is that it not only damages the structure of the existing ground, but the sampling range is also limited, cost is higher and operation speed is slower. For shallow seismic reflection survey, on the other hand, scattered energy of reflection waves and slow speed of weathering, have entailed a poor resolution of stacked profile and the impossibility of accurate reading. In order to seek an accurate, fast, economic and non-destructive method that can thoroughly investigate weathering and characteristics of underground geology, an attempt has been made to adopt GPR for detecting underground weathering of shallow layer. The experiment is done in mountainous area of Houlong Township, Miaoli County; the rock type of stratum is Shangshan sand rock of Pleistocene Toukoshan Formation. The research results indicate that there is an obvious reflection surface of electromagnetic waves, where the GPR can easily and accurately read out underground weathering. The result verifies that the method is not only accurate, fast and capable of reducing the high cost of seismic survey and drilling, but can also act as reference for regolith surveys for future industry.